Blog / When will oil prices recover

When will oil prices recover 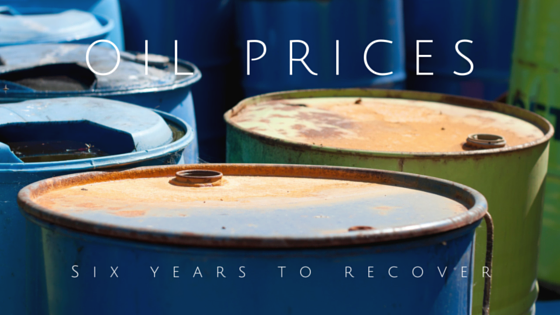 As mentioned in my previous blog post, “Oversupply driving low oil prices, not weak demand”, even though the world economies are relatively healthy, we have a glut of oil on the market and it is not likely we will see an end soon. With prior drops in the oil prices, we have become accustomed to see prices rebound with 1-2 years at the most. In the past we could always count on the Saudis cutting back production or some world crisis to threaten supply. Well, things have changed and in some long-term ways, especially for the oilsands in Canada. The question is, when will oil prices recover?

In order to stave off the inevitable, crude stockpiles have been increased to levels not seen in the United States since the 1930’s.  As of the beginning of November, overall oil inventories have climbed to three billion barrels. OPEC has been pumping above its collective quota while Russian output has climbed to a post-Soviet high. Iran is seeking to increase its output now that sanctions are being lifted, although that will take some time to reverse the neglect in its oil infrastructure. Iraq output has been climbing. Shale output in the US and from the oilsands in Canada have both been setting production records. The Saudi strategy of attempting to stimulate additional demand through low prices has little chance of absorbing the surplus in oil production.

While the drop in oil prices over the past year by more than one half has certainly hurt the Saudis and others, the Saudis, even with an annual budget deficit of over $100 billion, are well-positioned with reserved of approximately $600 billion to see this through several years. With no immediate crisis on the horizon in the Middle East, it is unlikely that there will be conflict anytime soon on the battlefield. At some point, the damage from low oil prices will become too much and there will have to be a truce eventually, but that could be several years off. While an increase in oil prices in unlikely to take six years to kick in, the same economics will apply once the price goes up to $60 per barrel. Shale production in the US will kick in again, as will lower cost production in Canada. Both of these factors and the additional growth expected out of Iraq and Iran will generate long-term downward pressure on the price of oil. Demand will also suffer as the new mileage standards kick in over the next few years for automotive fleets.

We had all better figure out how to survive and prosper in an era of low oil prices as they likely won’t improve anytime soon.

Streamlining your business process could be the key to the effective management of your oilfield service business, which will see you through these slow economic times.