The Cloud is here to stay for mid-market organizations.

Although it is pretty obvious to most observers and participants that while cloud-based software solutions are likely here to stay, mid-market organizations are really struggling with the timing and cost.

Most potential mid-market organizations often recoil from the perceived cost of Cloud systems as the typical rule of thumb is that you can pay for the upfront costs of an ERP system with approximately three years of cloud monthly subscription charges and the cost never goes down, unlike a financed ERP system. This really is not a fair comparison as most organizations treat their IT department as a sunk cost and do not factor those hardware, software, infrastructure, and personnel costs into their evaluation. As well, for anyone who has ever priced out an effective disaster recovery system, the ongoing costs of that option can be quite expensive after factoring in duplicate systems and some form of data replication.

One of the two most common advantages of cloud-based systems that we hear is the ability to transform upfront capital costs into monthly operating costs, which preserves valuable working capital for investing in the business instead of support systems. The second advantage is the ability of organizations to virtually eliminate expensive in-house infrastructure and IT support services. A third advantage, and arguably the most important, came to light recently in Alberta, Canada when a flash flood hit most of the south part of the province including Calgary, a city of over one million people. The flood in downtown Calgary inundated the electrical system with water and it took many businesses more than a week to get their offices back to work as transformers were dried out or replaced. One of our clients, however, had made the decision to move to cloud-hosted systems and their staff were back at work the next day from home or other remote locations. Another client who had suffered severe flood damage in a smaller city had their critical systems up and running the next day.

Vendors who provide software-as-a service (SaaS) have been around for some time while other vendors keep resisting the transition to the cloud. In their research, Gartner identified three different cloud deployment models including cloud-hosted, cloud-optimized and the cloud-native, each offering unique benefits to the organization.

The following table illustrates some of the differences among the three most common system implementation models – in-house, cloud (cloud-native), and hosted (cloud-hosted). 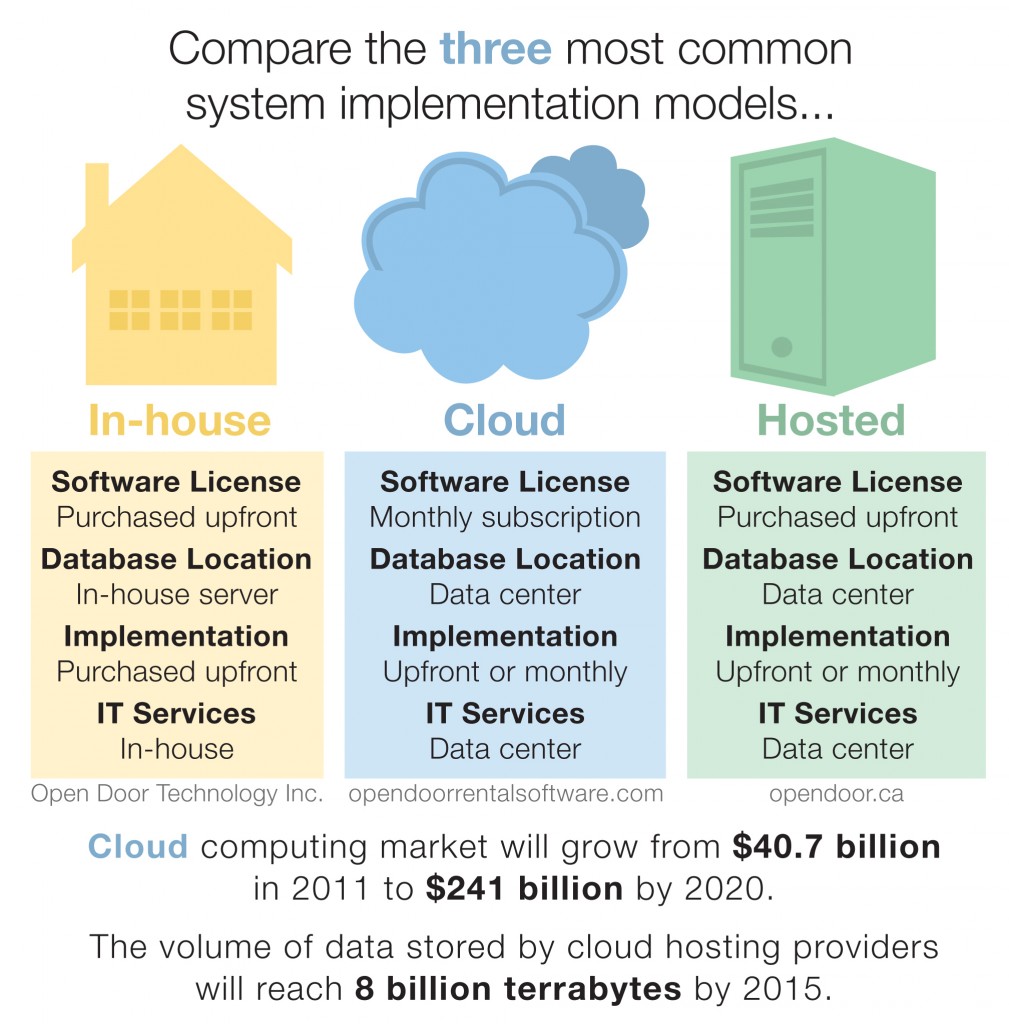 In summary, mid-market organizations stand to gain a level of professional IT support and disaster recovery that is difficult to obtain otherwise. The choice of what to do with the software license is a second question that should not deter organizations from selecting a cloud option.